Who Was Teddy Carroll? 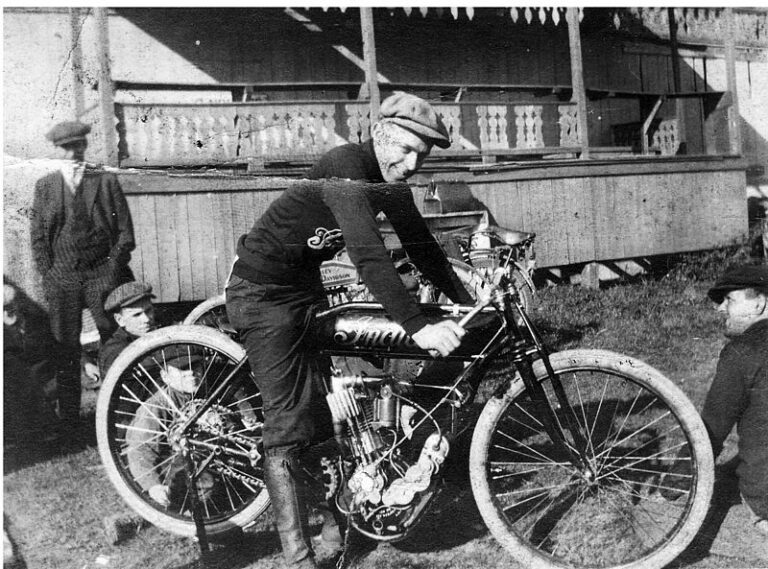 Teddy Carroll is well-known for riding on the Indian Motorcycle team in the 1919 Cornfield Classic in Marion, IN. However, this race was only one of many that Carroll was born to ride.

Edward “Teddy” Carroll was born in 1894 near the Hendee Manufacturing Co. factory, eventually to become the Indian Motorcycle Manufacturing Company. Being raised so close to this great factory, Teddy grew up with motorcycles on the mind. Teddy rode his first motorized bicycle when he was 12 years old, taking plenty of tumbles but enjoying the learning curve.

When he was 15, Teddy Carroll took a job as a laundry delivery boy, and he happened to drive an Indian Tricar van. When he was 18, he purchased his very first personal motorcycle, an Indian Twin. Then, he began entering races.

Carroll began his racing career rather dangerously. Board Track races were well known for being exciting and dare-devilish, as the motorcyclists wore little protection and drove close to 100 miles per hour with no brakes. Many motorcyclists suffered minor or severe injuries during Board Track races, some even fatal. Splinters were common on the harsh wooden track.

Not to be deterred, Carroll raced often and enthusiastically, winning small races and growing increasingly skilled at his passion. In 1914, he began working in the Indian Motorcycle factory testing room. A year later, the manufacturer sponsored Carroll with a brand new motorcycle, which he rode in his first professional race at the Readville Race Track.

What Happened to Board Track Racing?

Although a thrilling and exciting sport, Board Track racing eventually became a thing of the past. Its danger became outdated as modern day introduced protective gear and products. Motorcycle racing became more about the speed than the danger.

By the time Board Track racing was eliminated from racing, Teddy Carroll had already set several records.

A Passion for Motorcycles

Although he did set several records and won many races, Teddy Carroll’s legacy lies in the fact that he spent his life fulfilling his childhood dream. Born near the Indian Motorcycle manufacturer, he determined that he would live out his passion, and he did. He wore the red and white colors of the Indian Motorcycle company with pride, enjoying every race to its fullest.

Today, Teddy Carroll continues to symbolize the truth that anyone can do anything…especially if it means following your dreams!