Who Was Ray Creviston? 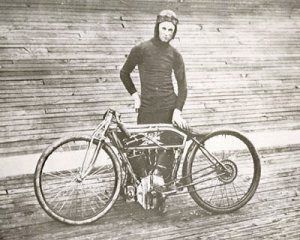 You can’t have “Indiana motorcycle history” without mentioning historical motorcycle racer Ray Creviston. Born and raised in Indiana, Creviston employed some impressive tactics that put him on the map as an early legend.

Like other racers of the early 20th century, Creviston lived for speed. Although he grew up on a farm in Converse, IN, he wasn’t afraid to venture away from home. In July of 1914, Creviston set the world record for the fastest mile on a motorcycle. He would go on to defend that title multiple times, keeping the Indian Motorcycle Company’s name at the top of the “victory list.”

One notable thing about Ray Creviston was his lack of fear on the racetrack. Despite growing up in a country environment, it is said that he had the personality of a New Yorker, tough and ready for any challenge that might come his way.

One of the reasons Creviston was so successful was a strategy he commonly employed, which continues to be a popular racing tactic today. Creviston would ride a short distance behind other racers, including his Indian teammates, coasting freely on the “windless tunnel” created by their machines. In other words, he let the rider in front of him deal with the wind resistance while he rode freely behind them. Then, at the last second, he would pull up and around them to take the lead. This tactic is employed by motorcycle and racecar drivers today. Many drivers even act as “allies,” helping one another gain speed until the very last minute when they become opponents once more.

Creviston handled his machine with extreme skill and precision, landing him a spot as one of the early racing champions. Like many other racers of the time, he bounced around with his brand deals. At times, he represented the Indian Motorcycle Company. Other times, he represented Excelsior, including at the Cornfield Classic in 1919. He was a particularly well-known rider for Indian, as he set countless racing records and gave them competition against the Harley-Davidson racing team.

What Happened to Ray Creviston?

Many of the early riders retired after the war when racing took a dirtier turn. Many racers attempted to harm their opponents for an easy win, and racing fatalities began increasing. Ray Creviston decided to return home to his farm in Indiana, where he lived a simple life. However, his legacy (and strategies!) live on today.