Who Was Edward Joel Pennington? 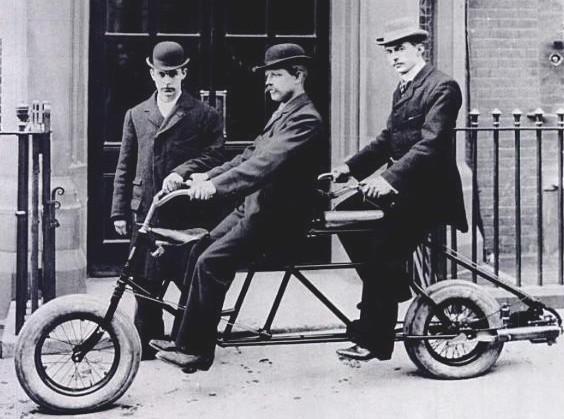 Many individuals possess mixed feelings about the actions of Edward Joel Pennington, but there is no denying the impact that he had on Indiana’s motorcycle history. Learn more about his story.

Edward Joel (E.J.) Pennington was born in Moore’s Hill, Indiana, in 1858. Known for being an inventor and a promoter of many mechanical devices, Pennington’s early years in the state of Indiana sent him toward automobile and motorcycle fame.

While Pennington had a knack for inventions and business, his integrity was less than admirable. Rather, his career began as a “get-rich-quick” adventure where he promoted his inventions with grandiose claims. He first developed his ambitious social engineering skills in small Hoosier towns, where he conned people into investing in dud companies.

Pennington always seemed to find financial backing for his business ventures, but his investors rarely collected dividends from his projects. Many regarded E.J. Pennington as a fraud on account of his unproven claims, yet he never went to prison for these accusations.

E.J. Pennington: A Passion for Patents

For all his character flaws and questionable morals, no one can deny that E.J. Pennington was “an erratic genius who perhaps lived too soon.” Pennington possessed a passion for machines, going on to develop over two dozen patents. In addition to motor vehicles, he received patents for Stirling engines, ignition systems, planing machines, and pulleys.

In 1893, Pennington submitted two documents that detailed his versions of early motorcycles. It is interesting to note that the term “motor cycle” traces back to these documents, as well as the exact year. Both documents declared Pennington to be the assignor for the “Motor Cycle Company of Chicago.” Although the word “motorcycle” originally appeared as a company designation, Pennington also promoted the term to encompass cycles with motors.

E.J. Pennington showcased his motorcycle prototypes at various exhibitions in Chicago and New York around 1895. These showcases garnered interest for investment opportunities.

How Did E.J. Pennington Impact the Motorcycle Industry?

Pennington’s testing and showcasing of prototypes in Milwaukee happened to catch the eye of William Harley and Arthur Davidson, who later established the Harley-Davidson motorcycle company. Additionally, Henry Ford took an interest in Pennington’s automotive prototypes, later creating an engine similar to Pennington’s.

Edward Joel Pennington’s name became well-known in early automotive and motorcycle circles. Although his engineering skills were fairly questionable, he was not afraid to pitch his visions and do whatever necessary to make people “believe.” He was well-admired for his passion and tenacity.

In the end, Pennington’s enthusiasm for motorized vehicles impacted how others viewed them and helped bring them to where they are today. His contributions to sparking the imagination and ambitions of many in the industry were well-received, and his death in 1911 was mourned by many.