Who Was Floyd Clymer? 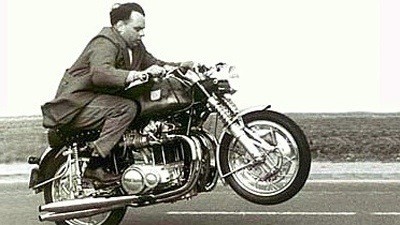 If you have spent much time studying early motorcycle history, you have probably run across the name “Floyd Clymer.” An avid racer with a passion for publishing, Floyd Clymer played an important role in shaping both the historical and modern automotive industry.

An Early Start to the Automotive Industry

Floyd Clymer was born on October 26, 1895, in Indianapolis, IN. Even as a boy, Clymer had the personality of both a salesman and an adventurer. He loved automobiles and learned to drive on his father’s Oldsmobile. He often “practiced” selling cars and became a convincing young businessman. At the age of 14, Clymer became a very young Ford dealer. In fact, he was the youngest in the country.

Not only was Clymer a natural salesman and a lover of racing, but he also possessed a bent toward authoring and publishing. As he edged closer to his 20s, he picked up two defining interests: motorcycle racing and magazine publishing. He won his first amateur race in 1912 and went on to win many after, including the 1920 National Sidecar Championship, as well as the Pikes Peak Hillclimb. His love for cars and motorcycles would go on to define his writing and publishing career.

If you are familiar with the name of Floyd Clymer, it is probably because you’ve seen it in a stack of published motorcycle manuals. Clymer got into publishing in his early 20s, and his first published work was called Motorcycle Topics. He authored and published countless motorcycle magazines, manuals, books about cars and motorcycles, historical views of vehicles, etc. Additionally, he used his skills in the industry to publish advertisements for his own racing.

In 1957, Floyd Clymer purchased “Cycle Magazine” from its old publisher, which is where he received much of his platform. Additionally, he published a yearbook for the famous Indianapolis 500 annually.

The result of Clymer’s publications was an army of people in the racing industry who referred to his books religiously. His vast knowledge regarding the automobile industry and history helped others who shared the same interests.

In addition to buying out publishing companies and increasing his writing business, Floyd Clymer was a businessman in other areas. He loved motorcycles and had a dream of owning the Indian motorcycle brand. He tried for several years and finally saw his dream fulfilled in the 1960s. Once he obtained the company, he began selling unique “minicycles,” which went on to inspire a new era of motorcycle designs.

Tragically, at the age of 74, Floyd Clymer suffered a fatal heart attack. He left behind a rich legacy of knowledge, passion, and creativity in the world of cars and motorcycles. Today, his name is still famous in the industry. He was later inducted into the AMA Motorcycle Hall of Fame, and his publications are still regarded with honor and respect.