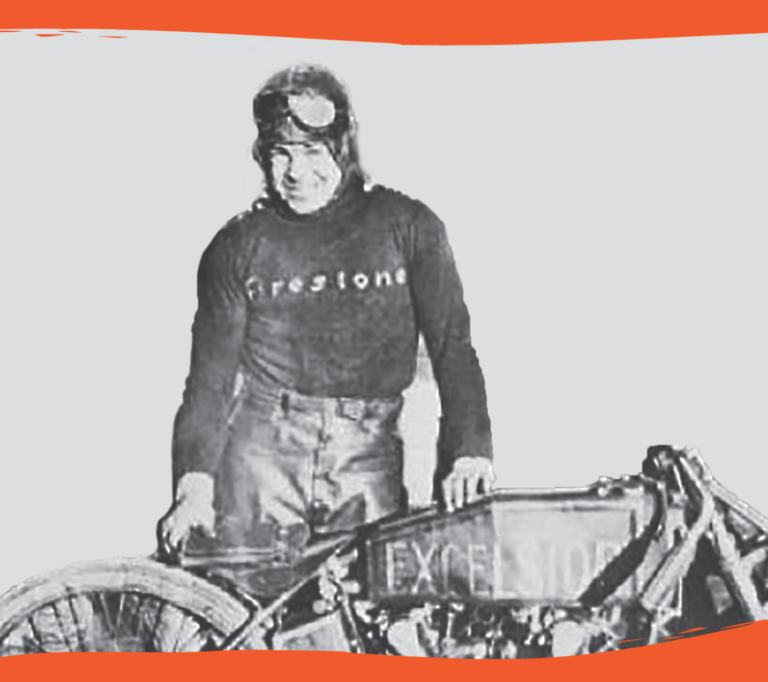 If you have researched the beginnings of motorcycle racing, chances are high that you didn’t get far without hearing the name “Bob Perry.” Known as one of the best and most fluid riders of the early racing industry, Bob Perry inspired countless spectators and riders, all with a smile on his face. Let’s take a closer look at how Bob Perry got his start and why he lives on in the AMA Motorcycle Hall of Fame.

Born in Montana in 1892, Robert “Bob” Perry did not experience much exposure to motorbikes as a boy. After his father died when he was 6, Perry moved to Illinois to live with his uncle. Although he grew up participating in regular athletic sports, he did not ride until later, just before college.

While many riders of the day began riding motorbikes for their delivery jobs, Bob Perry took a different approach. An acquaintance who happened to own a single-cylinder Armac offered to let Perry take it for a spin on the local racetrack. His only request was that Perry wait until his third lap to fully let himself go. Unfortunately for Perry, he got a little excited and opened everything up after his first turn. As he finished his first lap, the owner of the bike signaled him to stop. From then on, Perry was hooked on the speed.

Before Perry went to college, he worked a job in a chemical lab. This allowed him to save up for a bike of his own at the age of 19. He chose a single-cylinder Excelsior. And, unlike his first experience with the borrowed bike, he was free to ride as adventurously as he wanted.

Only a few months after his big purchase, Perry won his first race, a local Illinois event. He continued participating in dirt track races, winning many and slowly increasing his reputation. In 1913, he traded his single-cylinder for a double-cylinder Excelsior. At this point, he began an unofficial representation of the brand. As he continued tucking wins under his belt at local and state races, he took the monetary prizes and used them to obtain a degree in mechanical engineering. So, not only did he ride well, he understood the makeup of the machines he rode.

His skill combined with his knowledge made him a valuable asset to the Excelsior brand. In 1913, Perry set several speed records, making him a contender against other reputable riders of the day. In fact, he beat Maldwyn Jones for the 300-mile title in a Savannah, GA distance race at the end of the year.

Bob Perry would continue sweeping races for the next few years, making him an extremely popular rider amongst fans. In 1914, he crashed during a race in Canada, and his injuries prohibited him from racing for a while. However, he came back in full swing, his reputation suffering from no bruise. He raced in many famous races, including the Cornfield Classic in Marion, IN.

As Perry continued to represent the Excelsior motorcycle brand, he built a relationship with the brand’s owners, the Schwinns. They used him for his knowledge as well as his skill, as he worked in their factory as an engineer after serving in World War I in the Naval Aviation Corps. In fact, when he came back from the war, the Schwinns were firmly against his returning to racing, as they wanted him to remain safe. However, as skilled as he was in engineering, Perry loved riding even more.

In the beginning of 1920, Perry attempted to break a record during a race in Los Angeles. His goal was to break a lap record by turning without letting off the throttle. Unfortunately, his bike skidded and threw him into a wall. He died from his injuries later that night.

The Schwinn family was heartbroken. Mr. Schwinn went to his Excelsior shop and destroyed one of his motorcycles in absolute grief.

One of the most notable things about Bob Perry was that despite his skill and knowledge, he was genuinely humble, friendly, and likable. That was part of what made him so popular and why his death hit the industry so heavily. Today, Perry’s passion continues to inspire racers and historians alike. He was inducted into the AMA Motorcycle Hall of Fame in 1998.