What Was the Johnson Motor Wheel? 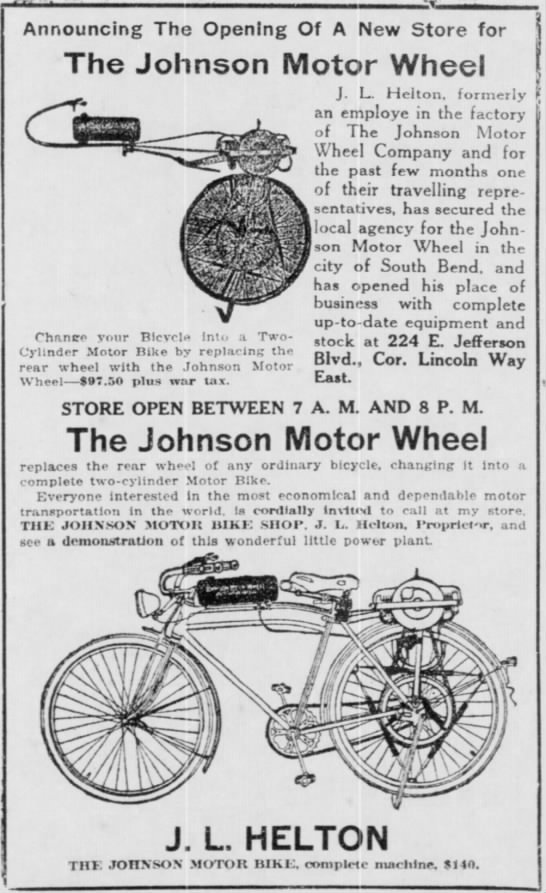 The inventor of the Johnson Motor Wheel, Louis Johnson, is not a well-known inventor today. However, his contribution to the motorcycle and automobile society was a fun and timely one to a fast-growing industry. Johnson’s idea for the Motor Wheel was simple. How could he turn a regular bicycle into a motorized bicycle?

In 1914 (the same year Erwin Baker set the speed record for coast-to-coast motorcycle riding!), Louis Johnson designed what would become a fun “DIY” motorcycle kit. This kit was patented in the United States 5 years later and in the United Kingdom 6 years later. Initially, the kit was flawed. It did not function well at high speeds, which, of course, is one of the joys of motorcycle riding. At this point, an inventor from Indiana by the name of Dick Oglesby offered his assistance.

Oglesby’s ignition magnetos, which increased spark plug voltage, fixed the problem nicely. At this point, Louis John and his brother moved to South Bend, Indiana, and became the Johnson Brothers Motor Wheel Company. It was time to begin selling kits.

History of the Johnson Motor Wheel

The idea of the kit was that anyone who purchased it purchased all the necessary items to create a motor system compatible with any 26” bicycle. In total, the Johnson Motor Wheel Kit sported a wheel, a hub tire, a wheel sprocket with chain, a spring sprocket holder, handlebar controls for the purpose of choke, throttle, and engine shutoff, and a 3-quart gas tank.

While not as powerful as a normal motorbike, the Johnson Motor Wheel was a great way to bring fun and luxury into a more common-day lifestyle. Bicycle pedals and gasoline worked together to move the bike quickly without blowing too much money. Almost anyone could use the kit and reward themselves with the thrill of a new gadget.

The Importance of Bringing Creativity to the Industry

Even today, turning regular bicycles into motorized bicycles is a common practice. Creativity is a gift in any industry, including motorcycles. Without passion and creativity, no invention would succeed. Louis Johnson’s passion for his motor wheel reminds us to enjoy life and that, occasionally, it’s okay to take chances.